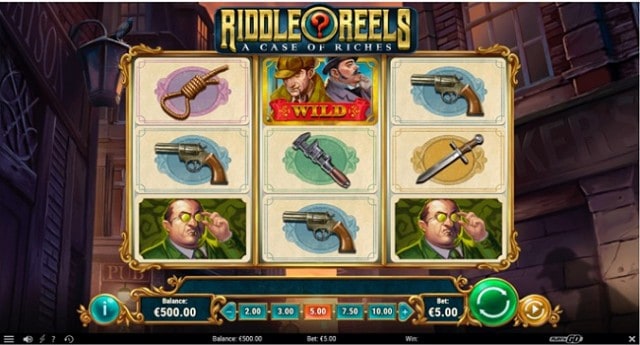 Riddle Reels: A Case of Riches is a classic video slot of 3×3 reels and 9 Paylines powered by Play’Go and is themed on detectives.

You will be joining world’s greatest detectives such as Sherlock Holmes in this game which looks very intense at the end.

The game takes place in a UK pub where low value symbols such as knives, guns, opens and wrenches can be seen.

Out of these all high paying symbols Professor Moriarty is the most rewarding one who pays 2x times of your bet size for 3 in a combination.

The game comes in with 3 wilds i.e. single wild, x2 wild and x3 wild multiplier and they replace other symbols on your screen except the scatter to get a combination.

If a winning combination is formed with more than 1 wild then the multipliers are multiplier to up to x27.

The game is playable across all devices including mobile phones with coin sizes of $0.10 per spin to up to $100 per spin. You may play this slot for real money using top play’n go casino sites reviewed here at top10casinoreviews.com

The maximum possible Payout in this game which has 5 bonus rounds can be 5,000x times of your stake and the RTP is 96.22%

Bonus Features in Riddle Reels: A Case of Riches

Riddle Reels: A Case of Riches slot possesses many great features including the Re-spin feature which is triggered if you land 2 scatters (magnifying glass with a question mark) symbols on your reels.

This feature takes place when you don’t get the Re-spin feature after having 2 scatters on reels. In that case the mystery feature comes in to play to give you great winning combinations.

This game is all about completing the clues and earning points which goes through the Clue Point Wheel meter via a charge. Once the meter is fully charges, you will be in Mega Spin feature.

If you are playing with Mega Spin feature then you will get 1 free spin and 1 reel will be wild or multiplier wild and you can re-trigger the ‘Case of Riches feature during this period.

In the case of not fully charging the meter you will get the Clue Point Wheel feature activated and this will give you 1 extra attempt to solve the case via spinning a wheel.