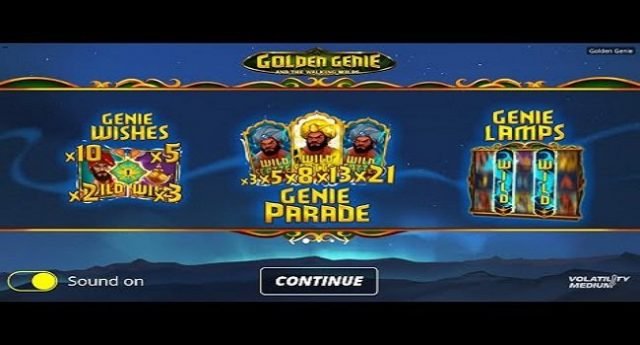 NoLimit City released a new online slot named Golden Genie and the Walking Wilds which is based on classic Aladdin and his magic lamp and takes place with 5 reels and 20 Paylines.

The stakes range for this slot are $0.20 per spin to $100 per spin and the max possible win on a single spin could be a massive 8,583x times of your bet size.

The symbols you will see on this game are A to 10 Royals along with a lamp, a panther, a leopard, Aladdin and a woman.

The woman is the most rewarding symbol who pays up to 25x times of your stake for 5 in a combination.

The Genie is the wild as well as the scatter symbol in this game and being a wild makes it special because it will replace all other symbols and can give you up to 25x times of your bet.

The Golden Genie and the Walking Wilds slot is playable across all of your devices including mobile phones and tablets.

Land an Aladdin symbol to the left of a lamp symbol and this feature will be triggered and in that case these 2 symbols will act as wild and may reward you x10 multiplier on your winnings.

If this feature takes place, the reel 2 and 4 will turn in to wilds and you will have a great combination.

Landing 3 or more scatters will trigger this great feature which offers you free spins along with increased x1 multiplier involved with it after every free spin takes place which could go up to x6.

If you don’t want to wait for the Genie Parade feature (that offers free spins and increased multiplier) then you can easily check out Nolimit Bonus feature for 80x of your stake.