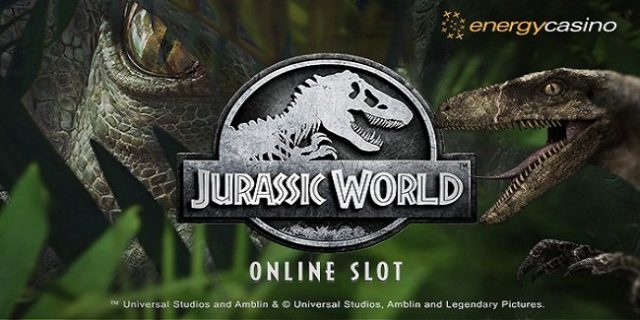 Leading Online casino service provider Microgaming has launched their latest online casino slot game known as Jurassic World online slot. The game is inspired by the Movie Jurassic World which was released back in 2015 on to cinema screens after 22 years of original Jurassic park film.

The movie received second biggest opening in the history of cinema and that is why it is one of the most viewed movie on the earth.

That is why world’s best gaming software provider Microgaming announced to launch Jurassic world online slot ( by the way they did launched the game at ICE in February 2017). This is the Microgaming’s second game; their first or Jurassic park online slot was launched in 2014.

This online slot game is perfect for adventurous players. This is a 5×3 reel slot game, where 243 types of ways are available to win the game. There are plenty of free spins available in the game as well.
Play at Energy Casino and receive $200+150 Free spins

A player can win a trip to Las angles if he or she plays a latest online casino game i.e. Jurassic World at energy casino. This latest game of online slot includes incredible prizes for players. The superstar first prize of the series includes return tickets for two from London Heathrow to Los Angeles.

The visitors will stay at Roosevelt Hollywood Hotel for 7 nights and they will also have a celebrity home for two. Private Los Angeles helicopter will be provided for the two with rooftop landing.

Players will automatically get an entry to this particular game series if they are playing over €25 of real money in to their players account.

When a player makes a deposit of €25 on the Jurassic World Online Slot during any one day, they will also receive an entry to daily draws for small cash prizes.