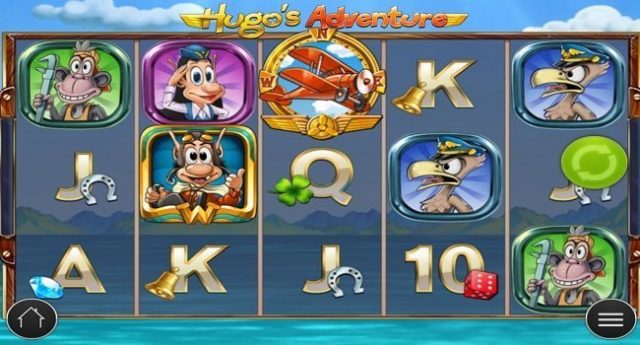 Play’n Go is creating history by launching another Hugo featured online slot game and that is Hugo’s Adventure.

Hugo’s Adventure is a sequel of Hugo and Hugo 2 which were also developed by Play’n Go Gaming and were very popular among players.

Hugo’s Adventure online slot is of 5 reels and 10 Paylines powered by Play’n Go and is playable across every device including smart phones.

The coin range for this adventurous slot machine starts from $0.10 per spin to up to $100 per spin.

You may play this slot for free or for real money at top Play’n Go Casino online rated and listed here at top10casinoreviews.com/

Play at Trada Casino or at Hello Casino

The free spins feature of this slot will give you up to 20 free spins along with a multiplier of up to 16x.

Meanwhile the maximum possible payout from this game per spin could be a massive 5,000 times of your stake.

Hugo’s Adventure takes place at sea and in the air where you will see many cartoon styled symbols including A to 10 playing cards as low paying symbols as well as some high paying symbols such as troll stewardesses, monkey mechanics and bird pilots.

As mentioned earlier, the Hugo’s Adventure slot comes in with 2 different features and one of them is the Underwater Adventure feature.

This feature is triggered when you land 2 submarine bonus scatter on the reels. The submarine then will spin and will let you win cash prizes by giving you extra 1, 2 or 3 lives only if you choose treasures under the sea.

The submarine will grant you extra lives because some of them could be dangerous for you but ultimately they will offer you up to 5x of multiplier.

The second bonus feature of this game is aeroplane free spins feature. You will play with starting 9 free spins which could go up by 20 free spins if lucky to land at least 3 scatters on reel 1, 3 and 5.

Flying Wilds on the reels- After every single free spins, the reels will be set to left and will reward you up to 16x of multiplier.