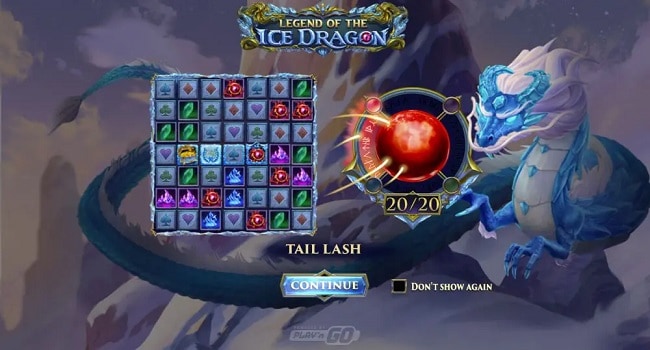 Legend of the Ice Dragon is an impressively designed Dragon theme online slot game of 7 reels and cluster paylines powered by Play’n go.

The game takes place against beautiful snow-capped mountains where symbols such as low value royals and high value dragons can be seen on the reels.

This is a fantasy theme mobile slot game which is playable across mobiles, tablets and computers with starting coin size of $0.20 per spin to up to $100 per spin.

Symbols of this slot are low value royals along with dragon eyes, flames, jewels and crowns.

The dragon eye is the most rewarding symbol of this game that offers 3x times of your stake for 5 of a kind anywhere on your reels.

Landing 30 or more of these symbols on your screen/cluster area will offer you 500 times of your stake.

Maximum possible payout would be 6,000x times of your stake and the RTP of this high volatile online slot is 96.29%.

If you wish to play Play’n Go Legend of the Ice Dragon mobile slot for real money then you should take a look at best play’n go online casinos.

The game also contains a wild symbol that replaces other standard symbols to get you a winning combination.

including the wild and scatters. Land at least 5 or more matching symbols on your screen to get a winning combination.

The first bonus feature of Legend of the Ice Dragon Online Slot is the cascading reels feature.

This is the feature which if activated will grant you multiple winning combinations.

Landing a wild will frame that position and the Ice Frame feature is triggered. In that case, the wild will offer you 1x to up to 8x multiplier.

You could have any 1 out of these 3 modifiers during the base game and they are Hailstorm feature, Avalanche feature and Blizzard feature.

2 to 5 symbols can turn in to wilds during Blizzard feature, and 3 to 7 symbols will become wilds during avalanche feature.

Ice Crystal feature is another feature which offers great results and payout in this Legend of the Ice Dragon slot. You can also play this slot via best european online casinos if living or residing in Europe.