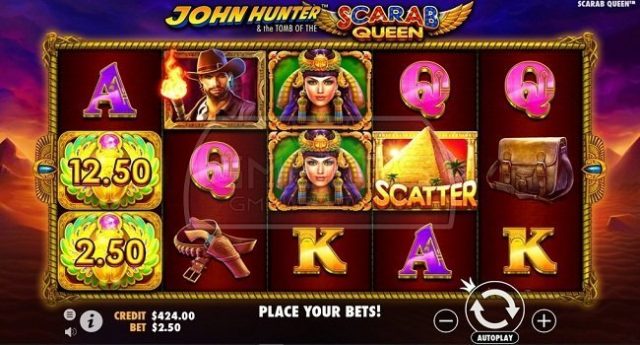 The game takes place in front of an Egyptian pyramid where you will see a lot of good high paying symbols on the reels of this game.

John Hunter & The Scarab Queen slot is playable across every single device either at mobile phones or tablets. The game comes in with 5 reels and 25 Paylines and is playable with coin sizes of $0.25 to $100 per spin.

John Hunter & The Scarab Queen offers you a maximum of 800 times of your stake as jackpot bonus and it also consist 2 bonus rounds including the free spins.

You will see some low paying symbols like A, K, Q and J playing cards on the reels as well as some high paying symbols including John hunter, the bags, gun holsters, the female Pharaoh (wild symbol) and Anibis (who is the dog god).

The John hunter himself is the most rewarding symbol here and pays you 0.4, 2 or 32 times your stake for 3, 4 or 5 of his symbols on your reels.

The female Pharaoh is the wild symbol who replaces other symbols on your view except the scatter to create a winning combination.

John Hunter & The Scarab Queen mobile slot also comes in with Money Collect feature. This feature comes in to play when you land scarab Money symbol on reel 1, 2, 3 and 4 and then you will have access to cash prizes generated by random cash value features and they are as follows-

Collect- If this random feature is triggered then the money of money symbols will be paid to you.

Extra Credit Collect – The value of these will be added to money symbols on your screen and will be paid out to you.

Multiplier Collect – The value of Money symbols on your screen will be multiplied by up to 25x and will be paid to you.

Expanding Collect – land at least 1 money symbol and it might expand to the whole reels to get you money symbol reel.

Respin Collect – Money symbols will be held and rest of the reels will spin to get more money symbols on board.

This slot also comes in with a Free Spins feature – You will receive 8 free spins if landing 3 pyramid scatters on middle 3 reels i.e. on reels 2, 3 and 4.

Basically this medium variance slot named as John Hunter and the Tomb of the Scarab Queen is a great slot machine developed by Pragmatic which could fetch you a whopping 10,500 times of your bet if playing for real money at best online casinos Pragmatic Play.