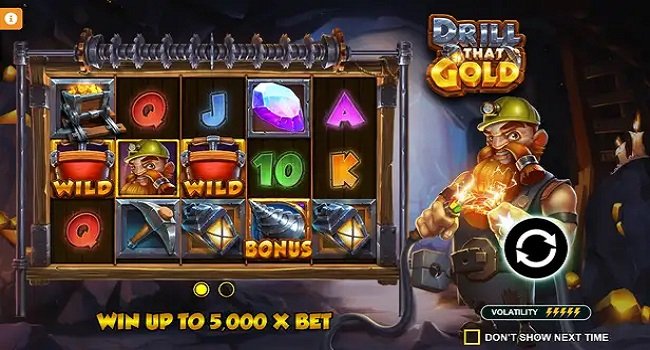 Drill That Gold is a gold mining theme video slot game of 5 reels and 20 Paylines powered by Pragmatic Play gaming.

The slot can be played via any of your devices including mobiles and tablets with coin sizes of $0.20 per spin to up to $100 per spin.

The game takes place inside a mining shaft, where you will see a minor drilling the play area at the right of the reels.

The graphics, background soundtrack and the playing arena of this pragmatic play slot is super awesome.

Symbols of this brilliant looking video slot include A, K, Q, J and 10 low paying royals along with diamonds, pickaxes, gold nugget cards, lantern, and the minor himself.

The later is the most rewarding symbol that pays up to12.5x times of your stake for 5 of a kind on your reels.

The game comes in with 4 bonus features such as Drill feature, Spin Modifier feature, Gold Spins feature and the Ante Bet feature.

The RTP of this high volatile online slot is 96.49%. A winning combination is form when you land 3 or more matching symbols from left reel to right reel. The game also features a wild symbol and a scatter symbol.

The detonator is the wild symbol which substitutes and replaces other symbols except the drill which is the scatter symbol.

As mentioned earlier, there are 4 bonus features existing in this game and the first one among them is the drill feature.

The drill feature gets activated when you land a full vertical stack of miner symbols on any of you reels.

And if that happens it will transform into silver drill and will offer you 2x to up to 100x of your stake.

Continuous non-winning spins can trigger this feature which lets you win 10x times of your stake or activates gold spins feature.

This feature can get re-triggered once you land another set of minor symbol throughout your reels.

The last feature of this game is the Ante Bet feature. If this feature activated, your stakes will increased to 25%.

Make sure to play Pragmatic Play Drill That Gold Slot Online for free or for real money top trending pragmatic play casinos reviewed below this page.