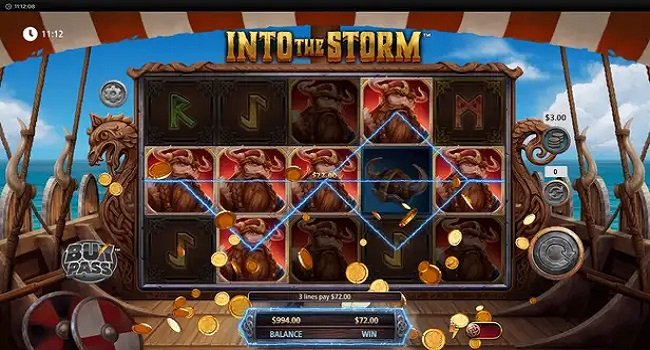 Into The Storm is a Viking themed online slot game of 5 reels and 20 Paylines developed by SG Digital.

The game is set on a board where you will see major Viking warriors and a Viking woman symbol on the reels.

Other symbols of this game include 5 low value royals along with the helmets, a wild and a lightning bolt scatter.

You can play Into the Storm Slot either for fun or for real money at various sg digital online casinos.

Into The Storm Slot is playable across all of your devices such as mobile phones, computers and tablets because it is developed via HTML5.

Scientific Games are known to create best video slots for online casino sites and this new mobile slot named Into The Storm takes place on a board of a Viking longboat.

This slot comes in with multiple Bonus features such as Hold & Win respins, Wilds, Scatters with walking wilds and random symbols.

The maximum possible payout in this game would be a handsome 10,500x times of your stake and if you are playing with the highest stake size, it would become great.

Into The Storm Slot Features

The first bonus feature gets activated when you land a wild symbol on your reels. The wild will substitute other regular symbols except the scatters to create a winning combination.

Another bonus feature of this game would be appearance of the respins feature which gets triggered randomly and offers you 2-4respins.

The third bonus feature is activated when you land Kraken scatters on your reels and this will add free spins to your playing area along with multipliers.