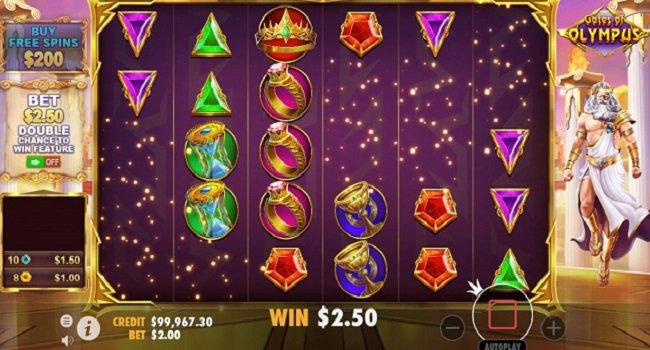 The Gates of Olympus is a 6 reels, 5 rows and All Ways Paylines slot machine powered by Pragmatic Play Gaming.

This is an Ancient Greek Mythology themed slot game which is playable across all of your devices including mobiles and tablets with starting coin size of just $0.20 per spin to up to $125 per spin.

The game comes in with 4 bonus features including the free spins feature which offers 15 to unlimited free spins and up to 500x multiplier.

The maximum possible payout could be 5,000x times of your stake and the RTP is 96.5%. The game contains 5 low value gemstones as well as King of the gods of Mount Olympus.

Other symbols are a ring, a goblet and a sand timer. The gold crown is the most paying symbol of this game which offers 50x times of your take for 12 of them on your screen.

The Zeus symbol is the scatter symbol which trigger the free spins feature.

There is no wild symbol available in this game but landing 8 or more matching symbols anywhere on your reels will create a winning combination.

As mentioned earlier, there are 4 bonus features available in this game including the Tumble feature, Multiplier feature, Free Spins feature and Ante Bet feature.

The animated Zeus when appears will activate the Multiplier Feature which may give you 2x to 500x of multiplier.

Landing 4, 5 or 6 Zeus will trigger the free spins feature and you will receive 15 free spins along with 3, 5 or 100 x your total stake. You can re-trigger this feature to unlimited times.

If you wish to play with this feature then you will have to pay extra 25 coins per spin and this feature will lead you towards a quicker free spin round.