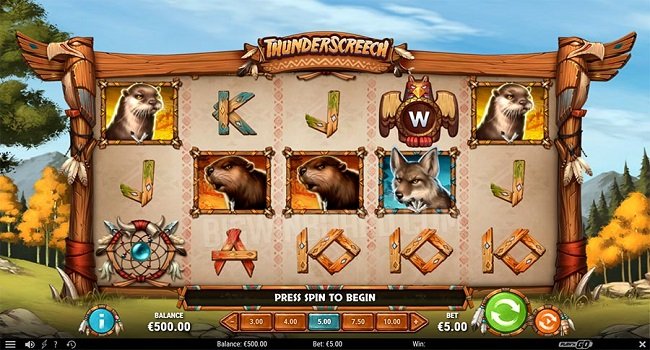 Thunder Screech is a Native American themed slot machine which takes place against a forest in the background and reels are set in totem poles.

The game is playable across all of your devices including mobiles, computers as well as with tablets.

The minimum betting size you can use to play Thunder Screech slot can be $0.10 per spin and the maximum can be $100 per spin.

There are 3 bonus features exist in this game including the free spins feature and multiplier which if activated will grant you 5 free spins and up to 9x multipliers.

Graphics of Thunder Screech slot are highly attractive whereas the soundtrack is at par above great.

The canvas-style reel contains A to 10 low paying Royals along with Raven character who pays 7.5, 15 or 75 x times of your stake for 3,4 or 5 of them on your Payline.

The Thunderbird totem acts as the wild symbol which appears only on middle 3 reels and replaces other symbols except the scatters to create a winning combination.

The Dream Catcher is the scatter symbol which if appears on your screen will trigger the free spins feature.

The game comes in with 3 bonus features such as call feature, strike feature and the most awaited free spins feature.

This feature is triggered on any random spin and when that happens it will add 5 and 9 wilds on your reels.

This feature can also get triggered on any random spin and it will then replace regular wilds to Thunder Wilds. It will also offer you 1x, 2x or 3x multiplier. This feature can be re-triggered.

Land scatters on reel 1, 3 and 5 to trigger the free spins feature and to get 5 free spins initially. All wilds will be upgraded to thunder wilds during this period of time.