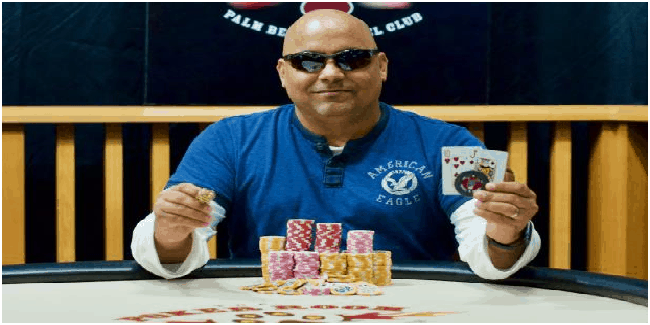 Raminder Singh, a 42 year old IT professional from Delray Beach, Florida has won the latest event of World Series of poker circuit at Palm Beach Kennel Club and pocketed $168,995.

The $1,675 Main Event attracted 524 players and generated huge amount of money in three days of game, but it was Singh did the job ultimately. Steven Stout finished his journey being runner-up for a total winning share of amount $104,483.

Meanwhile third position of this match belongs to another US pr named Jesus Cabrera who took home $76,328.

Raminder Singh was born in New Delhi, India but lived his life in the United States. He currently lives in Florida. This win has given him a direct entry to prestigious 2017 WSOP Global Casino Championship.

Singh was very happy after the match concluded and said that “I was really lucky”, because I just started getting good hands at right time”. The final table of the game took place for six long hours though.

The first player busted from the final table was Peter Vitantonio who was booked for ninth place. He made $15,681 from this world series of poker circuit.

Sam Panzica was looking good at the moment and was eyeing to win the title got busted to fifth place. He made $42,554 from the game before left the field for rest of the players.

It was all good time for Raminder Singh, who forced William Kopp to bust from the game to fourth place. Kopp made $56,584 from the play being fourth.