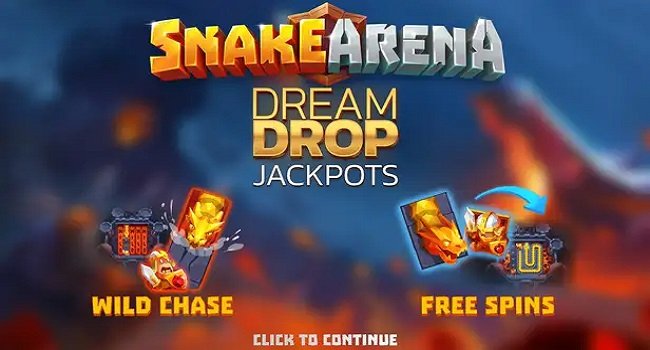 Snake Arena Dream Drop Slot is just like the original Snake Arena slot which is playable across mobiles, tablets or computers.

A winning combination is formed when you land 3, 4 or 5 matching symbols from left to right reel.

The visuals and graphics of this Relax Gaming Snake Arena Dream Drop Slot look amazing whereas the soundtrack is soundtrack and it is almost same as original.

The game also reminds us about Cash of Clans game which has a powerful outlook and an outstanding background soundtrack.

This high volatile relax gaming slot has an RTP of over 95% and it offers a maximum jackpot prize of 2,758.8 x.

The game is set in a castle where you will have a bird’s eye view on the reels from above.

The game has 2 wilds in the form of the knight and the snake head and they will replace other regular symbols. To trigger the free spins feature, you must land noth of these wilds at a same spin.

This slot has got everything that you might look while gambling online. The game is made via HTML5 technology.

This game can easily be played via mobiles and tablets. UK players can play this mobile slot at top uk online casinos whereas European casino players play at top European casino sites.

The first bonus feature of this relax gaming slot is the Wild Chase feature. This slot can get triggered randomly and in that case the snake may turn in to wild.

Free Spins feature- Landing snake head on reel 1 and knight on same spin will activate this feature where you get 60.53x of your stake.

The third feature of this game is Jackpot Spin and Dream Drop feature. This feature offers 5 jackpots to players.

The first jackpot rewards is $1, the second Jackpot called as Mini jackpot offers $5, the third is maxi jackpot that offers $100.