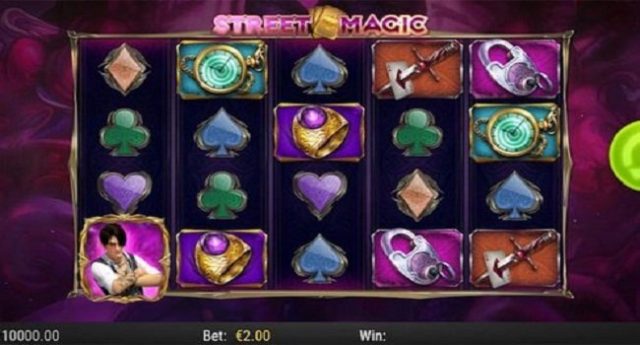 As the name suggests, Street Magic is a magical themed online video slot game for which reels are 5 and Paylines are 20.

The game is powered by Play’n Go software platform and is very popular among players. This is one of the newest slot machines from the house of Play’n go gaming.

You can play Street Magic slot using your devices which includes desktop, tablets or smart phones (Android or iOS).

This mobile video slot is awesome and it offers a jackpot of 5000 times of your total bet. The coin sizes for the game ranges from 20p per spin to up to €£100 per spin.

There are 2 bonus rounds available in this game and one of them is free spin feature. This feature will get you anywhere from 8 to 20 free spins after activation.

Play at LeoVegas or Casumo

Street Magic slot comes in with a magician performance where you would locate random wilds, wilds reels and a lot of free spins.

Street Magic looks mysterious in a purple and velvet background. The game features usual symbols like spades, hearts, clubs and diamonds as well as cards, handcuffs, stopwatches, rungs and padlocks.

The game has wild as well as scatter symbol in the form of its main character i.e. The magician. This symbol replaces all other symbols on your screen and appears only on reels 1, 3 and 5.

The magician as well as the ring will give you 25 times of your total bet if you are able to land 5 of these on your payline.

There are 2 features in this game and the first one is Magician Performances feature which is triggered when you land 2 of the magician scatter symbol on the reels.

1 out of 3 extra can be randomly chosen during Magician Performances feature.

The Wild Shuffle- during this feature 4 wild symbols are randomly added to your payline and making it a great combination.

The Expanding Man – During this extra feature 2 magician scatters will expand to 2 wild reels.

If you land Magician scatter lands on reel 1, 3 or 5 then you will trigger free spin feature. 1