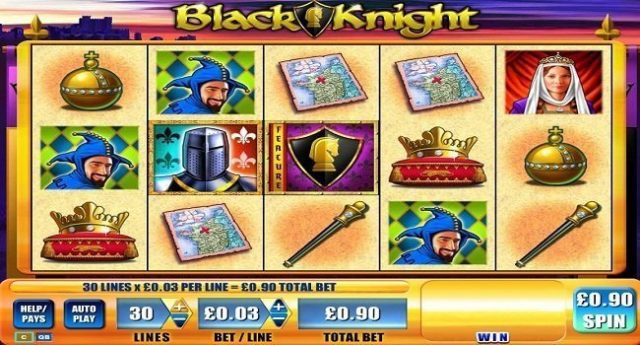 Black Knight is a new online slot game developed by WMS gaming. This is 5 reels and 30 payline slot machines which offers jackpots of up to £10,000.

You can play Black Knight slot using just 30p per spin to up to £150 per spin. The game also contains bonus rounds and free spin feature which gives you 7 free spins.

Black Knight is a classic slot machine inspired and themed on medieval history when Black Knights were fighting for their glory.

The most important thing about Black Knight slot is the Black Knight feature which is triggered when a player lands 3 or more Crest scatter symbols on reels 1, 2 and 3.

This is also known as free spin feature which after that would give you 7 free spins. Though, you may think that 7 free spins are not a big deal nowadays when there are plenty of new slot games offering up to 100 free spins then you are wrong because these 7 free spins of Black Knight slot are just start, and the wild symbols of the game will expand until this feature continues and that could lead you to a big win.

The Black Knight symbol itself the wild symbol which replaces all other symbols on your reels and can appear on middle 3 reels such as on reel 2,3 and 4.

The wild can expand throughout the reels and hence would be a game changer. Not only this, but you can also get 3 sticky wild reels during this feature.

Spins during the base game could get you anywhere from 5 to50 times of your total stake if you are lucky enough to make that profit.