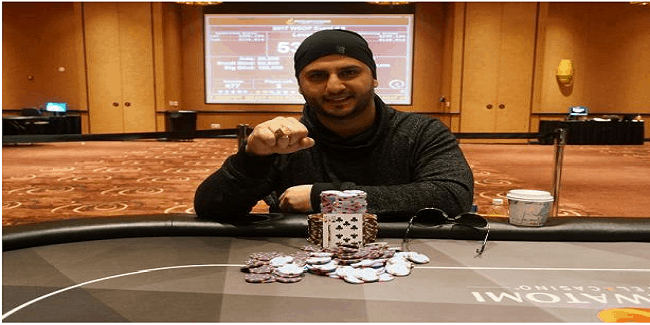 He pocketed an amount of $208,184 from this particular world series of poker circuit and also collected his first career gold ring.

Aqel will also get an automatic entry to prestigious 2017 Global Casino Championship. The $1,675 buy-in event attracted 677 players and generated over $1 million dollars of total prize pool.

Aqel is not new for Potawatomi because he just won one of his largest cash here at Potawatomi last November. In November 16, he pocketed over $138k from MSPT $1,100 buy-in event.

He now owns three biggest cash in Wisconsin poker history, but this particular win at WSOP main event is largest for him.

Alex Aqel was indeed very happy after winning this great size poker tournament. He said that playing for that amount of money was easy for me, because I have done a well job here last year.

He said that I am very happy to win my first WSOP gold ring. This is huge for me and I wanted to win this championship, he added.

Aqel further said that although I have played in at least 10 World Series of poker circuit, but every time I lose the game on first day of the event. I couldn’t make myself through to second day of any tournament and hence I am very happy to make this title possible for me.

This took a bit long, but it comes at right place, he said. This is fifth WSOP career cash for the winner, whereas second career final table till date.

Top 72 players collected at least $2,843 from the tournament. The final table of 9 players included some of notable players such as Josh Reichard, who comes eighth for a total $24,534; Chad Wiedenhoeft completed his journey being runner up for over $128,816, and James Gregg who finished third for a total winning share of amount $94,482.