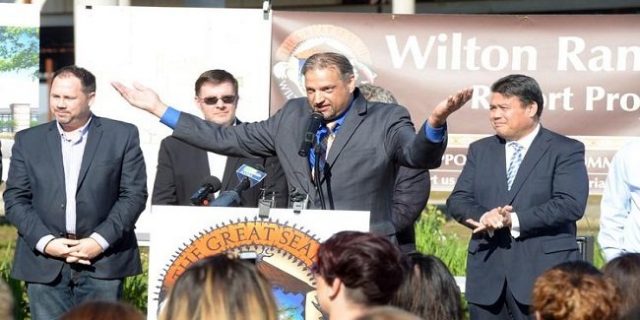 The Indian tribes are ready to build a casino in Elk Grove in a 36acrs of land which is approved by the federal government.

The elk Grove casino would be made by Indian Tribe or Wilton Rancheria and its gaming partner from Las Vegas.

The chairman of the group announced yesterday that the casino project in back on track after a lot of fowl attempts. Now we are ready to do our jobs says chairman of the Wilton Rancheria Mr. Raymond Hitchcock.

Tribal chairman Mr. Raymond Hitchcock said that after being homeless for at least six decades, we now have a home.

The tribe and its gaming partner Boyd Gaming of Las Vegas bought 36 acres of land last month from Dallas-based Howard Hughes Corporation for a price of amount $36 Million.

Howard Hughes Corporation was the developer of an outlet mall at the 100-acre site. The site is known “ghost-mall”.

U.S. Department of the Interior will now consider the property as a part of Wilton Rancheria group.

Hundreds of invited People were gathered to hear the announcement made by the chairman of the Group.

Addressing to the crowd Elk Grove official’s said that the Group owns the land and has the right to build a casino along Highway 99 without the city’s approval.

This casino project was rejected by many opponents. Many local residents were opposing the property saying that it will bring crime and traffic pollution to the area.

Some Elk Grove residents were happy after listening that the land is approved by the federal government. According to them, thus usa casino site will add values to the local economy. It will bring much needed jobs for the local people as well as will help local economy to grow faster.

Tribal leaders also said that many hurdles will overcome but we will take them a chance. The completion of the casino is expected to be in three to five years.