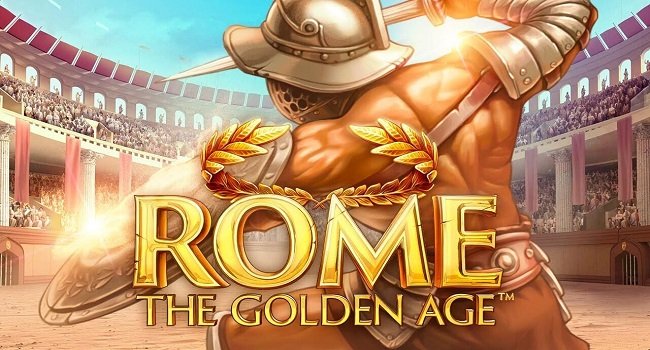 Players were eagerly waiting for a new NetEnt Video Slot and the good news is that ‘they have found a new one from the house of NetEnt named The Rome: The Golden Age.

The Rome: The Golden Age is a top looking video slot game of 5 reels and 20 Paylines powered by Net Entertainment and is playable across all of your devices.

The stake sizes for this slot ranges from $0.10 per spin to up to $50 per spin and it offers a massive 83,333 x times of your stake as highest Payout.

The game comes in with 3 bonus features including the wilds scatters, free spins and an increasing multiplier of up to x2,000.

As the name suggests itself, The Rome: The Golden Age slot is based on Ancient Rome where beautifully designed marble statues can be seen on the sides of the reels.

The playing environment, graphics and the intensive soundtrack of this slot are just awesome.

Symbols of this slot are low value A, K, Q, J and 10 royals as well as high value Roman helmets, gold rings, sword and an Aquila that contains of the symbol of Roman empire.

You will also see a tiger symbol which is the most rewarding symbol of this game which offers up to 5x of your bet for 5 of a kind. The wild symbol will replace other symbols and will pay you 5x of your bet.

The Return of player percentage i.e. (RTP) is also very good and it stands around 96.06%.

3,4 or 5 matching symbols across a Payline will create a wining combination and you will be paid.

The game has up to 1,000 autospin option which means you can set the betting/coin size for a certain range and could play without any middle interference.

The Golden Age symbol when lands on the reels will create a frame or may convert in to high paying Roman symbols to Pay you great prizes.

Land the Golden Age symbol during base game to gain points on the progress bar which may lead you the Free Spins Multiplier feature and you would receive Up to 1,000x times of your stake.

Landing 3 scatters on middle 3 reels will trigger the free spins feature and you would get 3 free spins initially along with 0.5 to 50x times of your stake.

Any remaining frame or active frame during free spins will be locked and a Rome symbol landing on any Unlock position will reward you 50x of your bet.

The number of free spins will also get a reset to 3, once a Rome symbol lands during this period of time.