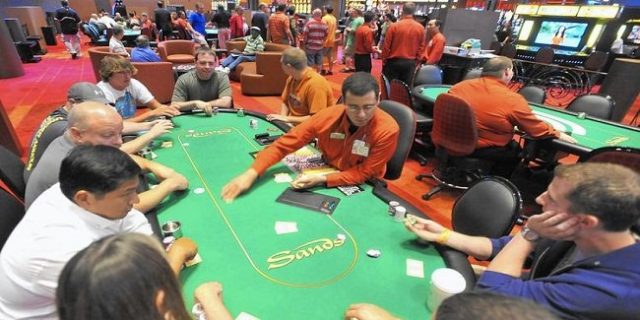 The Sands Casino located in Bethlehem is already one of the best casino places of the country. The casino has some of the most lucrative table game rooms inside, but they are making their move towards investing at least another $40 Million to make this place a super one for visitors and players.

According to the Bethlehem’s Department of Community and Economic Development, Sands casino is planning to makeover the casino by expending the size of the casino by two football fields and by adding a world class restaurant, a superb gaming area for table games such as Blackjack, Craps and roulette.

Meanwhile Mark Juliano, the chief executive officer made no comments on this projected expansion plan, by saying we’re not prepared to comment.

The plan however didn’t mention any estimated budget for this expansion, but according to an audit by Bethlehem’s planning department; it would be around $40 Million.

However, Most of the visitors of sands casino ask a dedicated gambling room for them. A Professional poker player from Bethlehem Scott Correll said, we need a better place to gamble because when you try to bet for $2,000 or $3,000 games, you will need to be focused and should be out of all distractions.

He said, as a table game player you need to be focused and concentrated, and not like another guy, who is screaming because of his slot machine making a difference to him.

Sands casino is currently one of the best places to play casino and poker games. The poker rooms however are at prime locations in the casino, but building a new poker room will add values to the casino and will be more lucrative than ever.

Sands is an $800 Million complex, which include a Casino, a hotel of 302 rooms, plenty of restaurants, 3,000 employees and a hugh fan base(visitors) of around 3 Million.

Robert Donchez, the Mayor of Bethlehem city made his statement by saying that the city will work along with Sands. Mr. Donchez also said that, it would be a great decision to make this place a top destination centre.